Telomeres are repetitive DNA sequences that protect the ends of each chromosome. Telomeres shorten with every cell division due to the ‘end replication problem’ and with DNA damage. Telomeres shorten with age and in disease (Blackburn, 2015). Long telomeres form a loop that prevents the DNA end from acting as broken DNA.  Short telomeres cause the loop to fail to form, exposing the DNA end, triggering DNA damage response pathways, resulting in cell senescence and cell death.  Short telomeres also cause chromosome-chromosome fusions which can cause chromosomal rearrangements which can lead to cancer (Blackburn, 2011).

Telomeres (yellow) at the ends of chromosomes (blue).

Healthy-length telomeres are essential for your health 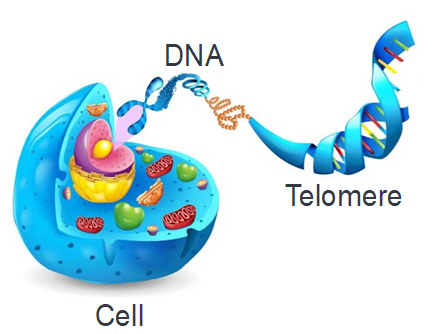 Telomeres are a biological clock

Problem:  Telomeres shorten as we age, causing death and disease

It has been known for over 35 years that the enzyme telomerase reverse transcriptase (TERT) extends telomeres.  But it was only in 2013 and 2019 that inventions at Stanford University enabled safe, rapid telomere extension by delivery of nucleoside-modified TERT mRNA (Ramunas, 2015).

Nucleoside-modified TERT mRNA can be used to extend telomeres in vitro or in vivo. TERT mRNA is translated into TERT protein, which goes to the nucleus and extends telomeres rapidly. The TERT protein is degraded within days, but during that brief time telomeres are extended rapidly, reversing a deacde of telomere shortening in days. The extended telomeres resume shortening immediately after treatment, important for safety.

Nucleoside-modified TERT mRNA increases telomerase activity in cells briefly (left). During this brief time telomeres are extended rapidly, by about 1 kb in a few days. This is the equivalent of reversing decades of telomere shortening during normal aging (middle). The treated cells are able to divide more times, but are not immortalized. The amount of telomere extension depends on the dose of TERT mRNA (right). TERT mRNA treatment delays senescence, rejuvenates old cells, and keeps young cells young longer (Ramunas, 2015).

We are moving TERT mRNA rapidly toward clinical trials.